I’ve recently watched Big Hero 6, and I have to say, it’s definitely in my top five favorite Disney movies. It’s a bright movie full of energy, and while it may have them, the darker and sadder parts do not bog down the movie. I will say, it’s not the all-time best Disney movie, but it’s certainly better than Frozen could ever be…in my opinion.

The animation is absolutely fantastic in this movie, it’s stylized in such an appealing way. I do feel like they could have done more dynamic shots, but overall it was a great design for the movie. Of all the characters, I definitely think both Tadashi and Baymax were spot on.

Like all Disney movies, many of us expected for the parents to be dead in the movie. I had previously known that Tadashi, Hiro’s older brother, dies in the movie, but I wasn’t expecting how he died. If you think about it in comic book terms, it’s actually a very open-ended death, and we could see Tadashi in a Big Hero 6 sequel. From what I know, there is a character called Sunfire, and has power involving fire. We could see Tadashi in “Big Hero 7” as Sunfire, and I would personally love that.

I was already sold on Big Hero 6 when I saw the cast. It is such a diverse and solid group, and I feel like it can be easy to relate to the characters. I personally relate to Honey Lemon, constantly wearing heels, the glasses, and bright clothing – but also being more than that, she’s smart and kind and has a sort of unbridled love for everyone. Like all the other characters, I would love for more development for her in the next movie.

I feel like this movie breaks a good amount of stereotypes. Honey Lemon isn’t just a dumb blonde chick, Wasabi isn’t mean and tough, and Go Go Tomago is tough, but she isn’t really mean and cold-hearted. It isn’t like this movie is really ground-breaking, but the fact that Go Go is Korean, Wasabi is African-American, both Tadashi and Hiro are Asian, and Honey Lemon is (supposed to be) Latina, it is considerably different from most movies, and fairly progressive.

Also, Baymax was amazing. He was the absolute best part of this movie. He was so incredibly soft, and from the beginning I think we all just loved him immediately. His design was absolutely perfect, I just don’t think there was another way to make him look so lovable and soft. I’m hoping they come out with more Baymax merchandise, because I would be happy to get more merch of Baymax!

They took a real risk with this movie, and I’m so glad it did so well. I was wanting a sequel before the movie even ended. I can only hope they actually do make a sequel. 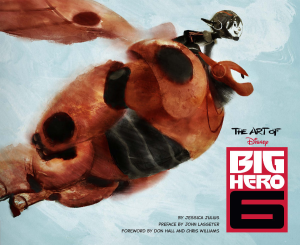