Nicolas Cage is an interesting actor. Is he a great actor? No…he is the same person in every role he has ever played. Has he been in more bad movies than good? Yes. Are some of the same movies worth a watch only because of Cage’s over the top and very unique acting style? Hell yes and Ghost Rider: Spirit of Vengeance is one of those movies.

I keep hoping they will come out with a Ghost Rider movie that really honors the source material. I would love to see something similar to the first two Blade movies. Good quality R-rated horror. Two movies in and we have not gotten close, but since Marvel has regained the rights to the character recently perhaps there is hope for the future. For now we have these Nicolas Cage vehicles which are not good by any stretch of the imagination, but are fun nonetheless.

The first one was okay, but in terms of bad movies Spirit of Vengeance was the superior of the two. Cage was somehow even more over the top than the first film, but it worked in a bizarre way. I am always surprised that he is still a working actor, yet I find myself buying his films and actually enjoying them. I believe Mr. Cage is deserving of a long term, analytical study to determine why many people like myself still watch his work and actually do not feel guilty afterwards as we should.

This movie was strange and seemed like the director did not know what was going on half the time, but I still enjoyed this movie and paid attention throughout. I was going to go into more detail on the storyline, but figured that would be a waste of energy since it seemed to not be a focus of this film.

I enjoyed that there was a pivotal character named Danny who is a reference to the alter ego of another incarnation of Ghost Rider, Danny Ketch. I also enjoyed Idris Elba as Moreau. He was over the top as well, but Elba always adds a gravitas to his performances and it worked.

If you have Netflix and 96 minutes to kill and are not worried about losing a few brain cells, watch this movie and revel in the fact that Marvel has the rights back and will hopefully give us a great Ghost Rider movie in the future. 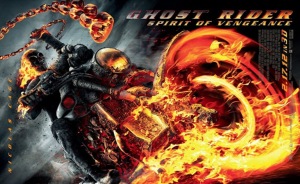