Dave Bautista (spelled ‘Batista’ in the WWE) has really elevated his celebrity status in recent years. With the Guardians of the Galaxy having the biggest August opening yet, his name is becoming more well known amongst the general public every day. Then why do pro-wrestling fans hate him so?

Wrestling fans are an interesting bunch. Very loyal to the product and the performers, but if you look at them sideways they will turn on you instantly and wish you death. When Batista made his big WWE return earlier this year the reaction was huge and the fans went wild, but the next day those same fans decided to boo him and turn on him for no apparent reason. He is pretty outspoken in regards to his opinions on a wide variety of topics, but nothing so bad that I feel would make him unlikable.  He may not be the greatest in ring performer of all time, but he performs his role in the ring very well and has been a part of some big WWE story lines and matches.

Perhaps it is the old “he sold out” routine. Those fans are right…how dare he try to be a successful actor and wrestler! He is at the beck and call of the fans and should do what they say *major sarcasm*.

Plain and simple, just like The Rock before him, he will always be a wrestler and now has added film acting to his resume. Good for him and after the Guardians of the Galaxy he is only going to become a bigger star and us wrestling fans will just have to learn to share him with the rest of the world. 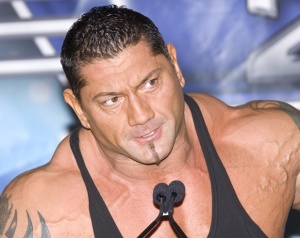