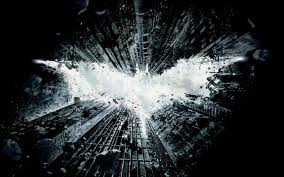 Christopher Nolan’s Batman trilogy is the best portrayal of the title character and his mythos we have seen in movies/television to date. All three movies were well done and made Batman relevant to the general public again.

I will give my opinion on all three in this single post…I am assuming most people have seen all three movies so there may be spoilers without warning:

Hot damn this is a great movie! I was thrilled when I heard they were re-launching Batman and looked forward to a more serious, realistic tone and this film did not disappoint. Christian Bale is the perfect Batman/Bruce Wayne. I feel he is the first actor to get both sides of this character right. Yes, I agree that his Batman voice is a bit over the top, but for me it works. Michael Keaton was a great Batman, but did not get the character of Bruce Wayne correct in my opinion. He was brooding in both roles and seemed to forget that Wayne pretended to be happy out of the costume so people would not make the connection between him and his superhero persona. Bale was a terrific Batman and portrayed Wayne’s artificial ‘playboy’ persona perfectly. I do not feel his performance of the title character will be surpassed any time soon.

The overall casting of this movie was perfect with Cillian Murphy as a terrifying Scarecrow and Liam Neeson as the true Ra’s Al Ghul working as perfect villains for this origin tale. Michael Kane as Alfred with Gary Oldman as Jim Gordon was great casting of two of Batman’s most trusted allies. The only casting choice that I did not like was Katie Holmes as Wayne’s love interest. This was a character that was not needed to make this movie work and would have made it that much better if she was excised from the script all together.

Overall, this was a great re-telling of Batman’s origin and was a very promising start to the franchise.

The BEST Batman movie ever! Simply WOW! The late Heath Ledger’s performance as The Joker was pure brilliance and he more than deserved the Academy Award he won posthumously. I still love Jack Nicholson’s portrayal of The Joker from years ago, but Ledger’s was, and may possibly always be, the best. He was simply perfect and really had a grasp on all of the character’s nuances.

Aaron Eckhart also did a fantastic job as Harvey Dent/Two Face. He made you root for his character throughout the movie and feel sympathy when he was hideously scarred and sought revenge. His death at the end of the movie was appropriate, but I would have liked to have seen him in the final film.

Overall, this is one of those rare 2 hour plus movies that keeps your attention throughout and wanting more.

Not the best of the three, but definitely one of the best Batman movies overall. It seemed like a natural progression from the end of the previous film and was overall well done and a fitting end to Nolan’s trilogy.

Anne Hathaway did a good job as Selina Kyle/Catwoman. I was not expecting much so I was surprised when she did such a great job and really held her own.

Tom Hardy as Bane was a great casting choice and despite the peculiar voice, I felt the portrayal of Bane in this movie was well done.

I only had 2 issues with the film…it seemed a tad too long and the reveal at the end of Ra’s Al Guhl’s daughter Talia being behind everything did not seem to be too effective. It may be because I already knew about this event, but it still seemed to not have the kind of “punch’ you would want.

I really enjoyed how the movie ended with Bruce Wayne finding happiness and Blake (Joseph Gordon-Levitt) turning out to be Robin and taking on the mantle of Batman.

Overall, this was a terrific trilogy that did Batman justice.

I sincerely hope Ben Affleck can do an admirable job portraying this legendary character, but do not expect him to surpass Bale’s.

Here’s hoping we do not get another George Clooney type performance!

One thought on “The Nolan Batman Trilogy”