I am going to combine some PPV’s so as not to bore anyone with match by match descriptions and just discuss the highlights, and any notable lowlights, and catch up to what I have watched on the WWE Network so far.

First off is WCW Halloween Havoc 1990.

The first highlight for me was The Steiner Brothers vs. The Nasty Boys. Two very popular tag teams who were at the top of their game in this match. Nasty Boys were the heels and what I have always been impressed by is the fact that they excelled as either the bad or the good guys. Many wrestlers struggle when they are out of their comfort zone, but not The Nasty Boys. They seem to love being the heel just as much as they love being fan favorites. What they lacked in athletic ability they more than made up for with ring psychology. They were great at working a match and The Steiner Brothers are one of the best teams of all time for them to work with. The Steiner’s are very athletic and really know how to work the crowd. They spent a large portion of their careers as faces and it worked. They had a very long run as a tag team and are truly one of the greatest teams of all time. The Steiner Brothers won in a very exciting match that deserves a re-watching.

The other notable match was Sting vs. Sid Vicious. It was surprisingly fast, about 12 minutes long, but was fun either way. The ending was slightly confusing since Sid pinned a fake Sting, but suddenly the real Sting runs out and wins the match. Kind of unnecessary, but interesting to say the least.

The rest of the card was not very notable with the exception of Stan Hansen vs. Lex Luger. Stan Hansen was not a great worker in my opinion and him coming out with chewing tobacco running down his chin was just plain gross. Hansen winning the match was even worse. 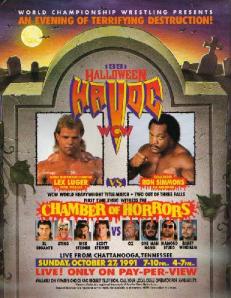 It started off with a Chamber of Horrors match featuring El Gigante, Sting and The Steiner Brothers vs. Cactus Jack, Abdullah the Butcher, The Diamond Studd and Big Van Vader (the attached poster shows different participants since there was a last minute change) ending with Abdullah the Butcher being ‘electrocuted’ and giving the win to Sting and his team. Very strange gimmick, but bizarrely entertaining.

The best match of the night was Stunning Steve Austin vs. Dustin Rhodes. The two of them always seem to have great matches together and this was no exception. It ended in a time limit draw, but still managed to be a satisfying match between two great performers.

The third and final match of note was Lex Luger vs. Ron Simmons in a two out of three falls match. Both wrestlers put on a great match, really worked well together, and even though Lex Luger won, Ron Simons still came off great.

The quality of the Halloween Havoc PPV’s can be a bit iffy, but I still enjoy them. Something about the whole Halloween theme that entertains me, probably since it is my favorite holiday.