A Nightmare on Elm Street, released in 1984, is the movie that got me in to horror movies when I was a teenager. There was just something about the movie’s creepiness and the killer himself, Freddy Krueger, that really intrigued me and turned me in to a life long horror movie fan.

Re-watching the first movie as an adult, it still has that creepy factor and I still see Freddy as the best horror movie villain ever created…even in his later, silly catchphrase incarnation.

For the few horror movie fans that may have not seen it I will just give my general opinions and mention some of my favorite moments without spoiling anything.

What caught my eye was the fact that through a large potion of the movie you do not get to see Freddy clearly which makes his eventual full reveal more shocking if this is your first exposure to the character. The look of Freddy is effective for a first movie and Robert Englund’s performance is perfect. I have the recent remake in my collection, but have yet to watch it since it is hard to imagine anyone else in the role since Englund portrayed this character perfectly for 7 films.

The gore effects stand up fairly well with my favorite of the film still being the classic Johnny Depp bed blood geyser. Even if you have never seen this film, it is one of those classic horror movie moments that just about every fan is familiar with. It is also amusing watching Depp in his first major movie role and to see how much he has grown as an actor over the years.

I also enjoyed John Saxon as the father of the heroine of the story, Nancy (played by Heather Langenkamp). Sometimes actors in horror movies can come off as not taking the medium seriously and acting goofy and over the top. Saxon takes his role and the movie itself seriously and plays his part perfectly.

The movie can easily be obtained on DVD or blu-ray separately or in collections of the 7 original movies through all the normal retailers. As a big fan I have the original DVD 8 disc set and it holds up very well.

This is one of those films that is a perfect example of why the ’80’s slasher movie craze was so big and how, despite a lot of the straight-to-home-video horror movies that made the genre look bad, there are still many great exceptions with A Nightmare on Elm Street being at the top. 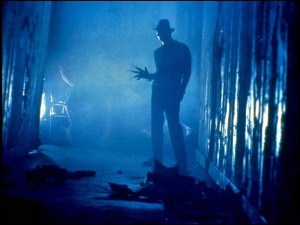