The action figures I have a very large collection of is the Jakks Pacific’s line of WWF/E toys which lasted from 1996-2009. This was the ‘Attitude Era’ line and had some great figures. No matter the wrestler it seemed they all had at least one figure with the top stars receiving many variations. They also featured past stars as well.

They also came out with the Titantron series with microchips in the figures that when attached to a special playset would play their theme songs. Pretty nifty technology for the time.

There were all kinds of wrestling rings, cages to attach to those rings, and various accessories for your own hardcore matches.

Plain and simple, this is a great line and lasted as long as it did because of that.

Currently, Mattel produces WWE figures and has some great looking collector’s lines of current and former stars that I would love to add to my collection. I stopped collecting wrestling toys a few years back and I think now is a great time to get started again. 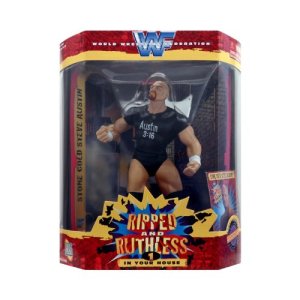