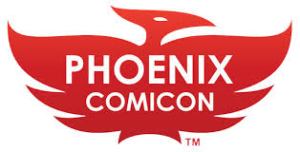 Another Phoenix Comicon (held June 5-8) has come and went and as usual, my family and I had a great time.

Phoenix Comicon used to be a very small comic convention held in a Mesa, AZ convention hall and a few years ago they moved to the much larger Phoenix Convention Center in downtown Phoenix. Since then it has grown to be one of the largest cons in America.

Last year they exceeded 55,000 in attendance and current estimates have this year’s attendance growing to around 70,000. This is both good and bad.

Lots and lots of vendors

They opened up even more of the convention hall than they did in 2013 and it allowed for an awesome selection of vendors. They have some bigger comic book companies there like Dark Horse, Aspen, etc..(no Marvel or DC, yet) and a ton of artists, comic creators, toy sellers, knife sellers, etc…I was able to add to my collection of Munchkin card games and did it at a reasonable price. The convention hall had just about any type of merchandise you could want.

We did not get to attend any programming this year, but PCC had it all. Movie/television actors, writers, comic creators, how-to’s for pretty much anything geek related, the list goes on…You should be able to find plenty of programming to keep you entertained throughout the weekend.

I am amazed by who they get to make appearances and sign autographs. Comic creator wise they had Stan Lee, Chris Claremont, Tony Moore, Andy Kubert, and many more. In regards to authors they had Charlaine Harris, Jim Butcher, Patrick Rothfuss, and several others. For actors we met Mark Sheppard and John Barrowman. They also had Danny Glover, Bruce Campbell, Nathan Fillion, Adam West, and a ton more.

Now for the one bad thing…

The volunteers who handle the autograph lines

Year after year this is the one area of the con that seems to keep getting worse. Whether it is some guy who has no clue what they are doing or a person who is just plain rude, this is the one area that continues to deteriorate. It started well enough on Friday when we got in line for Mark Sheppard (from Supernatural and a super nice guy by the way). The volunteer working the line was polite and kept everything well organized. My wife even commented to them how great they did and it was much better than last year.

Then came Saturday. In 2005 my family and I went to our first San Diego Comicon, mostly to meet Bruce Campbell. At that con we were in a long line and it went smoothly. We got a great picture of my then 5 year old daughter and Bruce Campbell joking with each other with big smiles on their faces. We were thrilled he was coming to Phoenix this year so we took that 7 year old photo, had it printed as a nice 8×10, and planned to have him sign it. We got in line approximately 45 minutes before his signing time started. There were not a ton of people there yet and the volunteers were not allowing people to line up. I started to walk away and literally 30 seconds later the PCC volunteer screams for everyone to get in line on the side of the section. Suddenly, a mass of humanity moves past me. No big deal, I walk over to get my place in line and about 100 people deep they tell me no else can get in line. The original screaming volunteer decides to start yelling at everyone again (mind you, she was not talking loudly, she was screaming like she was mad at everyone there) and I could not make out every word she said, but the gist was only 100 people could get in line and the rest of us would have to come back tomorrow. My wife and sister-in-law tried to get things figured out, but to no avail. Long story not so short, we did not get to see Bruce Campbell. We kept getting excuses thrown us like “Bruce only wants 100 people in line” to “fire code regulations prevent us from having a longer line” which made no sense since everywhere else had long lines that were handled much better. The rudeness and ignorance of their autograph line volunteers is frustrating and prevented my family from getting the autograph we were most excited for.

One other thing regarding PCC volunteers. There was a girl at the con who looked barely 16 years old wearing an inappropriately skimpy costume. 3 volunteers who looked close to my age (30’s) were taking pictures of her and acting disturbingly pervy. These people may be working for free, but they need to better screen out the creepy and rude ones.

Overall, we had fun and will go again next year with the hope that the people who run the Phoenix Comicon will finally get the volunteer situation worked out because if they don’t, they will see their crowds shrink.